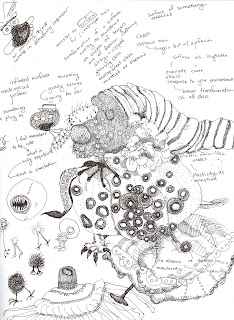 I was organizing my home office and found my old sketchbooks from grad school and earlier. I thought I'd keep them around and look at them. Its helpful to look at them. Geez has it already been four years since I graduated? This image was made just after I started Jerry Mischak's Wintersession class at RISD on Monsters. We watched Monster flicks like the Blob and Invasion of the Body Snatchers and talked about camp and kitsch! It was fantastic. The work in that course ranged from highly conceptual to creature-feature models that were so good the kids could have trotted over to a studio and gone to work on the next feature film. I just made weird drawings and sculpture and learned about the Wolf Man's walk (very haggard and limpy).
Posted by Unknown at 4:52 PM

Upcoming and Past Shows